In summer 2022, K3 is expanding this residency programme with various cooperation partners: In August, the artists Diana Akbulut aka Daya Jones (Switzerland), Dimitrios Mytilinaios (Greece), Daniella Santibañez Monasterio (Chile), Sara Sguotti (Italy) and Yeong Ran Suh (Korea) are invited to work in the studios of K3. At the same time, Carolin Jüngst, Yolanda Morales and Luísa Saraiva will have the opportunity to use the studios of the cooperation partners between July and November.
The focus of this year's exchange format is on its hybrid character. In addition to the on-site exchange, K3 is developing an online exchange before and after the on-site exchange at the respective institutions, as well as an associated digital workshop programme, in order to make the residency as long-lasting and sustainable as possible.

The hybrid residency programme is developed as part of "dive in. Programme for Digital Interactions" of the Kulturstiftung des Bundes (German Federal Cultural Foundation) with funding by the Federal Government Commissioner for Culture and the Media (BKM) through the NEUSTART KULTUR programme. 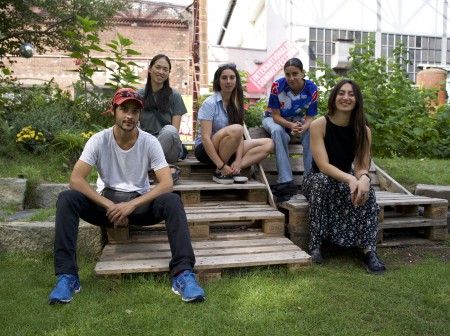