back to overview
TanzHochDrei digital

THE END OF THE ALPHABET | PRE-PREMIERE

Lea Moro performs the big gesture of musicals with simple abstraction. She moves through the glamorous emptiness of the stage space on roller skates while developing a simultaneously powerful and fragile movement language. As was the case in her past pieces Le Sacre du Printemps, a ballet for a single body as well as (b)reaching stillness, she cites classical music: structured in song chapters, this precarious freestyle is accompanied by Antonio Vivaldi’s The Four Seasons. The End of the Alphabet deals with moments in which familiar states end, and it offers a darkly humorous space for ambiguous sensitivities, overwhelming feelings and melodramatic scenes.

Prior to the peformance you can visit the VOICE WARM-UP by Johanna Spörk.

In 2014, she was awarded a DanceWeb scholarship and then selected for the PAP Mentoring programme 2014 - 2016. Her solo Le Sacre du Printemps, a ballet for a single body toured internationally. She curated and organized the Acker Festival in Berlin and is also part of the curatorial team of Schloss Bröllin.
During her K3 residency, she will be examining musicals as a format that seeks to entertain a large audience through narration, virtuosity and illusion. In her research project The End of the Alphabet, she will confront this structural mass with a solo – a single body on roller skates – and in doing so question the possibilities and limitations of this large format through the solitude and vulnerability of the solo. 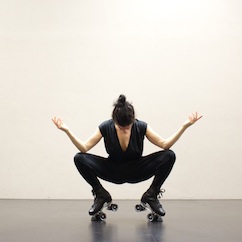